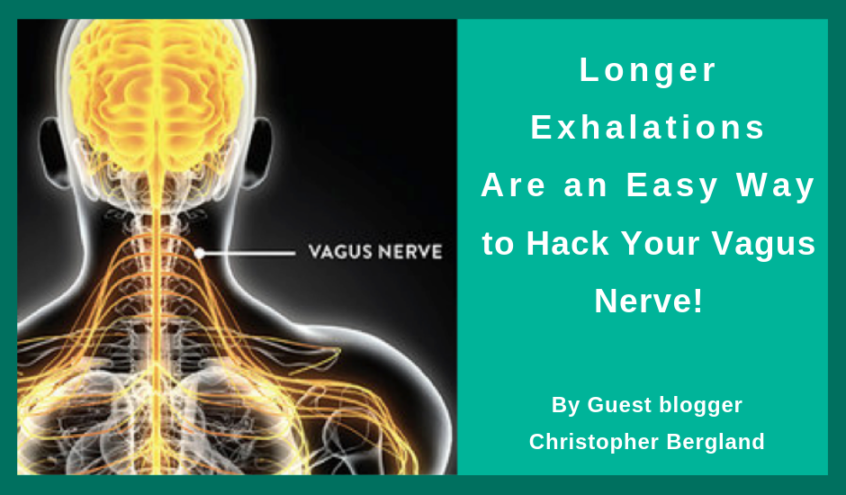 This blog is credit to: Christopher Bergland The Athlete’s Way

This post is a follow-up to “Diaphragmatic Breathing Exercises and Your Vagus Nerve,” from that earlier series of posts. I’m excited to update what was primarily speculation a few years ago with some new scientific literature (Gerritsen & Band, 2018 and De Couck et al., 2019). These studies corroborate that longer exhalations are an easy way to hack the vagus nerve, combat fight-or-flight stress responses, and improve HRV.

What is HRV? Heart rate variability represents the healthy fluctuation in beat-to-beat intervals of a human or animal’s heart rate. During the inhalation phase of a breathing cycle, the sympathetic nervous system (SNS) facilitates a brief acceleration of heart rate; during exhalation, the vagus nerve secretes a transmitter substance (ACh) which causes deceleration within beat-to-beat intervals via the parasympathetic nervous system (PNS).

Nota bene: I grew up in a household with a neuroscientist father, Richard Bergland (1932-2007), who was also the author of The Fabric of Mind. My dad idolized Nobel-prize winner Otto Loewi (1873-1961), who discovered the first neurotransmitter (acetylcholine), which is the chief neurotransmitter of the PNS. What we now refer to as acetylcholine or ACh was originally coined “vagusstoff” (German for “vagus substance”) by Loewi around 1921.

In a simple but elegant experiment on frogs (that came to Loewi as a Eureka! moment in a dream), he found that a tranquilizing substance squirted directly out of the vagus nerve onto the heart, which caused a frog’s heart rate to slow down immediately. (See, “How Does ‘Vagusstoff’ Calm Us Down?“)

As a tennis player, my father used the same breathing techniques he used in his neurosurgery operating room to stay calm. He taught me the basics of how to use deep, slow breathing techniques to hack the vagus nerve and slow down my heart rate, just like a frog in Loewi’s lab.

Without going into too much detail, my father taught me that by increasing the duration of my exhale after taking a deep breath, I could trigger my vagus nerve to squirt out some stress-busting “vagusstoff” on demand. This “stuff” was like a self-made tranquilizer that would relax my nerves and help me avoid choking or double-faulting during match points.

Later, as a student at Hampshire College, I practiced yoga regularly and was guided by an instructor who also emphasized the importance of focusing on the inhalation/exhalation ratio during yogic breathing exercises. Although he didn’t mention anything to do with neurobiology or psychophysiology, it was clear that many of my instructor’s breathing techniques emphasized longer exhalations, just like my father had taught me.

Based solely on life experience, I saw a parallel and had a hunch that these centuries-old methods of shifting the inhalation/exhalation ratio that often had long-winded Sanskrit names such as “bhastrika pranayama” were ancient vagal maneuvers unwittingly designed to hack the vagus nerve long before Otto Loewi discovered vagusstoff.

It’s reassuring to have fresh research corroborate that each of us can trigger a “relaxation response” (Benson et al., 1975) simply by focusing on the inhalation-to-exhalation ratio of our breathing and consciously extending the length of each exhale while doing breathing exercises as we go about our day-to-day lives.

In 2018, Roderik Gerritsen and Guido Bandof Leiden University in the Netherlands published a detailed theoretical review, “Breath of Life: The Respiratory Vagal Stimulation Model of Contemplative Activity,” in the journal Frontiers in Human Neuroscience. This review presents a wide range of studies that illustrate how slower respiration rates and longer exhalations phasically and tonically stimulate the vagus nerve. Using diaphragmatic breathing techniques to kickstart the calming “rest and digest” influence of the parasympathetic nervous system is referred to as respiratory vagus nerve stimulation (rVNS). (For more on traditional VNS and non-invasive vagus nerve stimulation (nVNS) see here, here, here, and here.)

Throughout their paper, Gerritsen and Band explain how the latest research on rVNS fits into a historical timeline of other techniques used to harness runaway fight-or-flight stress responses and calm the autonomic nervous system. The authors write:

“The breathing techniques used in contemplative activities (e.g., meditation, yoga, tai chi) include, but are not restricted to, slowing down respiration cycles, shifting to longer exhalations compared to inhalations, shifting the main locus of respiration from the thorax to the abdomen (diaphragmatic breathing), or paying attention to “natural” breathing. Especially slow and deep breathing with emphasis on long exhalation is dominant across traditions, including zen and vipassana—though there are a few practices stimulating faster respiration patterns (i.e., the yoga technique “breath of fire”). The [vagus] nerve, as a proponent of the parasympathetic nervous system (PNS), is the prime candidate in explaining the effects of contemplative practices on health, mental health and cognition.

Frequently adopting these respiration patterns (slowed and with longer exhalations) can explain a significant part of the efficacy found within contemplative activity practice. Though contemplative activities are diverse, they have shown a similar pattern of beneficial effects on health, mental health, and cognition: mostly in stress-related conditions and performance. This pattern can be explained by these controlled breathing exercises.

Clearly, these functions all move the system towards the rest-and-digest mode of operation and away from fight-or-flight. Not only does [the] vagus nerve control heart rate and slow deep breathing; slow respiration rates with extended exhalation could also activate the PNS by vagus nerve afferent function in the airways. This is a form of respiratory biofeedback. Slow breathing techniques with long exhalation will signal a state of relaxation by the vagus nerve, resulting in more VN activity and further relaxation. Though VN involvement can explain the effects on health and mental health, the link with cognition is less clear. One of the links between respiration and cognition is HRV.”

Another recent study (De Couck et al., 2019) published this month, “How Breathing Can Help You Make Better Decisions: Two Studies on the Effects of Breathing Patterns on Heart Rate Variability and Decision-Making in Business Cases,” reports that just two minutes of deep breathing with longer exhalation engages the vagus nerve, increases HRV, and improves decision-making. These findings were published in the May issue of the International Journal of Psychophysiology.

The second arm of this study asked one group of participants to perform two minutes of skewed vagus nerve breathing before taking a 30-minute decision-making test. The control group watched a video and did not focus on breathing patterns. Notably, participants in the group who focused on breathing patterns with longer exhalations for two minutes reported lower levels of stress and provided a significantly higher percentage of correct answers to business-related test questions than controls. The authors conclude, “These studies show that brief vagal breathing patterns reliably increase HRV and improve decision-making.”

A myriad of breathing patterns can improve HRV. That said, based on the latest research, practicing rVNS breathing via longer exhalations for just two minutes appears to be an easy way to hack the vagus nerve and calm one’s nervous system.

One gadget-free way to track the timing of your inhalation-to-exhalation breathing cycles per minute is to use a 4:8 ratio of four-second inhalations and eight-second exhalations. This breathing cycle takes 12 seconds which equates to five inhalation/exhalation cycles per minute. Based on road-tested outcomes, I really like the 4:8 ratio because it’s easy to use my right hand to count up to five with each digit and use the fingers on my left hand like an abacus to keep track of each one-minute cycle.

Anytime you want to hack your vagus nerve to reduce stress or improve decision-making, a simple self-talk script could be: “I’m stressing out. In order to calm down so I can perform better on this decision-making task, I’m going to take two minutes (right now!) to do 10 rounds of vagus nerve breathing based on a 4:8 inhalation-to-exhalation ratio.”

During the four-second inhalation phase, I’d recommend breathing in through your nose—as you relax the back of your eyes and visualize filling up your lower diaphragm with oxygen—and slowly count to four. Then, I’d recommend exhaling through pursed lips (as if you’re blowing out lots of candles on a birthday cake) as you slowly count to eight.

Remember: If you’re feeling especially stressed out, you can increase your rVNS breathing time to five minutes or a total of 25 twelve-second 4:8 breathing cycles. Repeat as needed.

Related Article: HOW TO FIX YOUR GUT TO HEAL YOUR BRAIN